It’s hard to imagine (and easy to forget) that there was ever a time civilization functioned without printing.

By making it easier, cheaper, and faster to copy and disseminate information, printing enlightened the world. It broke down barriers of knowledge between the educated, wealthy few and the masses living in darkness. Without printing, the scientific and societal advances that followed – modern medicine, democracy, the internet – may never have emerged.

In honor of printing technology’s incomparable contribution to global history, let’s take a look at its origins and how it has changed over the centuries. You might be surprised to learn that printing did not begin with Johannes Gutenberg in Renaissance Europe. Printing flourished in China for hundreds of years before its adoption in the West. 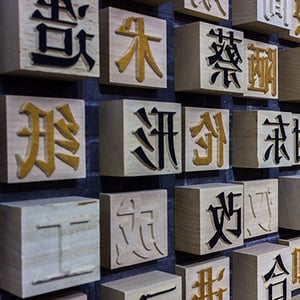 On the 13th day of the fourth moon in the ninth year of Xiantong – or what we would call May 11, A.D. 868 – a man named Wang Jie commissioned a printing of a 17-and-a-half-foot-long scroll whose full translated title is “The Diamond That Cuts Through Illusion.”

Wang Jie had no way of knowing that one of these copies of the Buddhist text – the “Diamond Sutra,” as it is commonly called – would survive to the 21st century as the world’s oldest complete and dated printed book.

The Diamond Sutra, which is now in the collection of the British Library, is an early example of woodblock printing in East Asia, but it is not the earliest. Fragments found in Korea show the practice existed in the late seventh century A.D.

Woodblock printing – as the name suggests – involves transferring images and text onto sheets of paper using carved blocks of wood. The manuscript is first created by hand on waxed paper by a master calligrapher. The wax prevents the paper from absorbing the ink. The manuscript is then placed face down on a block of wood, leaving an ink impression on the wood. Next, the non-inked surface of the wood is carved away, creating a reverse image of the original calligraphy.

The resulting carved block can be used to print the same image thousands of times. The process is simple: A printer applies ink to the surface of the block, lays a piece of paper over it, and presses the paper down gently with a soft pad.

Woodblock printing is laborious by modern standards, but in Tang Dynasty China, it was immeasurably more efficient than copying a text by hand. 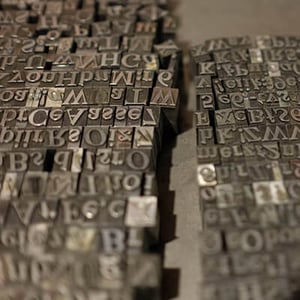 Moveable type – the innovation for which Gutenberg is so widely celebrated – made its debut in China sometime around A.D. 1040. The inventor was a man named Bi Sheng. We don’t know much about Bi Sheng, but we do know it was his idea to carve individual characters onto small, rearrangeable blocks for printing, rather than to carve an entire text.

“His method was as follows: He took sticky clay and cut in it characters as thin as the edge of a coin. Each character formed, as it were, a single type. He baked them in the fire to make them hard. He had previously prepared an iron plate and he had covered his plate with a mixture of pine resin, wax, and paper ashes. When he wished to print, he took an iron frame and set it on the iron plate. In this he placed the types, set close together. When the frame was full, the whole made one solid block of type. He then placed it near the fire to warm it. When the paste [at the back] was slightly melted, he took a smooth board and pressed it over the surface, so that the block of type became as even as a whetstone.”

No examples of Bi Sheng’s work exist today, but there does exist evidence of the information revolution he ignited. Chinese artisans went on to experiment with other materials for type, including wood and metal. By the time of the Southern Song Dynasty (1127 to 1279), books were common in Chinese society, enabling the growth of a learned class. Huge libraries were important status symbols for the wealthy.

In 1313, Wang Zhen, a government official and inventor during the Yuan Dynasty, set out to make the first mass-produced book in history, an agricultural manual called the “Nong Shu” or “The Book of Farming.” To increase the speed of typesetting, Zhen designed revolving tables that stored and organized thousands of wooden blocks of type. Thousands of copies of the Nong Shu were printed, spreading advanced agricultural practices throughout China.

Clearly, Johannes Gutenberg invented neither the printing press nor moveable type. Those technologies first appeared in China. But Gutenberg’s achievements should not be dismissed. He mechanized printing and developed more efficient techniques for casting metal type. The upshot was no less than an intellectual rebirth in Europe and the first stages of a Western printing tradition that continues today.

Stay tuned, as we’ll explore Gutenberg’s legacy in greater detail in our next post. Subscribe to our blog to be notified about all our new posts. 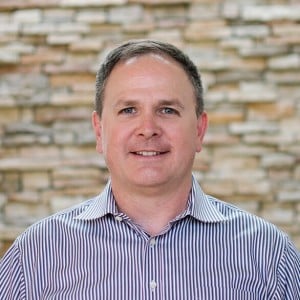